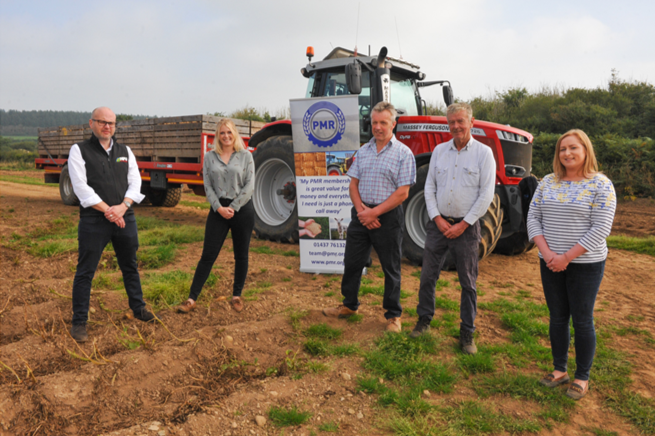 An initiative founded on the principle of matching a shortage of machinery on one farm with a surplus on another is celebrating 30 years of operating.

PMR, then known as the Pembrokeshire Machinery Ring, was founded at a farmers’ meeting in October 1991 as a conduit for farmers to contract in equipment used only occasionally to minimise their own investment, or to contract out machinery to better justify ownership.

In the intervening 30 years its growth has been significant and 800 members and farmers can now find the best deals on straw, fuel, seeds, animal health products, even machinery spare parts.

PMR general manager Mary Rees says the organisation is continually evolving to meet the needs of its members.

Her father-in-law, Charles, of Dudwell Farm, Camrose, was at that first meeting. For him and his son, Tom, membership of the ring has taken the legwork out of buying herbicides, fuel and seed.

“There is just one number to ring, it probably saves us a day a month,’’ says Charles.

PMR takes care of all the invoicing, running a direct debit system for services and goods supplied.

The meeting that started it all was called by the then NFU group secretary David Taylor; Nick Helm of the Severn Wye Machinery Ring was the speaker at that meeting.

Farmers were so impressed by what they heard that they each pledged £10 to get the Pembrokeshire Machinery Ring up and running.

A £10,000 European Union grant then allowed a new computer system to be installed and north Pembrokeshire farmer Graham Perkins was appointed as general manager.

He ran the organisation from his kitchen at a time when the mobile phone had yet to become commonplace so the bulk of his calls came when farmers were at home having their breakfast, lunch or evening meal.

Fuel sales was the next service to be added, based on the idea of bulk buying from multiple vendors to get the best price for members.

In 2003 its reach extended into South Wales and field officers were appointed for Pembrokeshire, Carmarthenshire, Ceredigion, Monmouthshire and Glamorgan.

Neil Davies, who later became PMR’s general manager, was one of those field officers.

He helped to establish the training division, PMR Direct, a company limited by guarantee but wholly owned by PMR, to deliver mainly statutory courses such as pesticide use.

Its role has developed since its inception and while there is still some association with the word ‘machinery’, it is about much more than that now.

There is renewed interest in membership from individuals who have no interest in sharing machinery, but who want access to the other services, says Mrs Rees.

“We are always going to adapt to meet the needs of our members, and are still adding extra services,’’ she says.

In the latest development, PMR is working with all the machinery rings in England and Scotland to install a new software system that will further improve efficiency.